Where is the Good News in Rap Music? Professor Josef Sorett and Scholars Explore Religious Ideas in Rap from 1970s to Today

This summer, Columbia Summer hosted Religion and the History of Hip Hop, a series exploring a century’s worth of the growth and themes of Black music in the United States. During the first half of the series, Josef Sorett, Professor of Religion and African American and African Diaspora Studies at Columbia University, invited Juilliard Professor Fredara Hadley, University of Virginia Professor Claudrena Harold, and his own undergraduate students to select and discuss songs that demonstrate the role of religion in Black American life and how it shaped early and contemporary gospel music, blues, and rhythm and blues.

The second half of the series followed the history of hip hop from the 1970s to the present, and studied the range of religious ideas and practices that have animated the performance, production, reception, and consumption of rap music.

How did religion appear in hip hop as the genre first emerged? What was the response of religious, academic, and community leaders to the sounds of a new genre? Marcyliena Morgan, Ph.D., Harvard University’s Ernest E. Monrad Professor of the Social Sciences, Professor of African and African American Studies, and Executive Director of the Hip Hop Archive and Research Institute, joined Dr. Sorett to explore these ideas and queued up songs by DMX, MC Hammer, the Geto Boys, Bone Thugs-N-Harmony, Nas, and Kanye West. 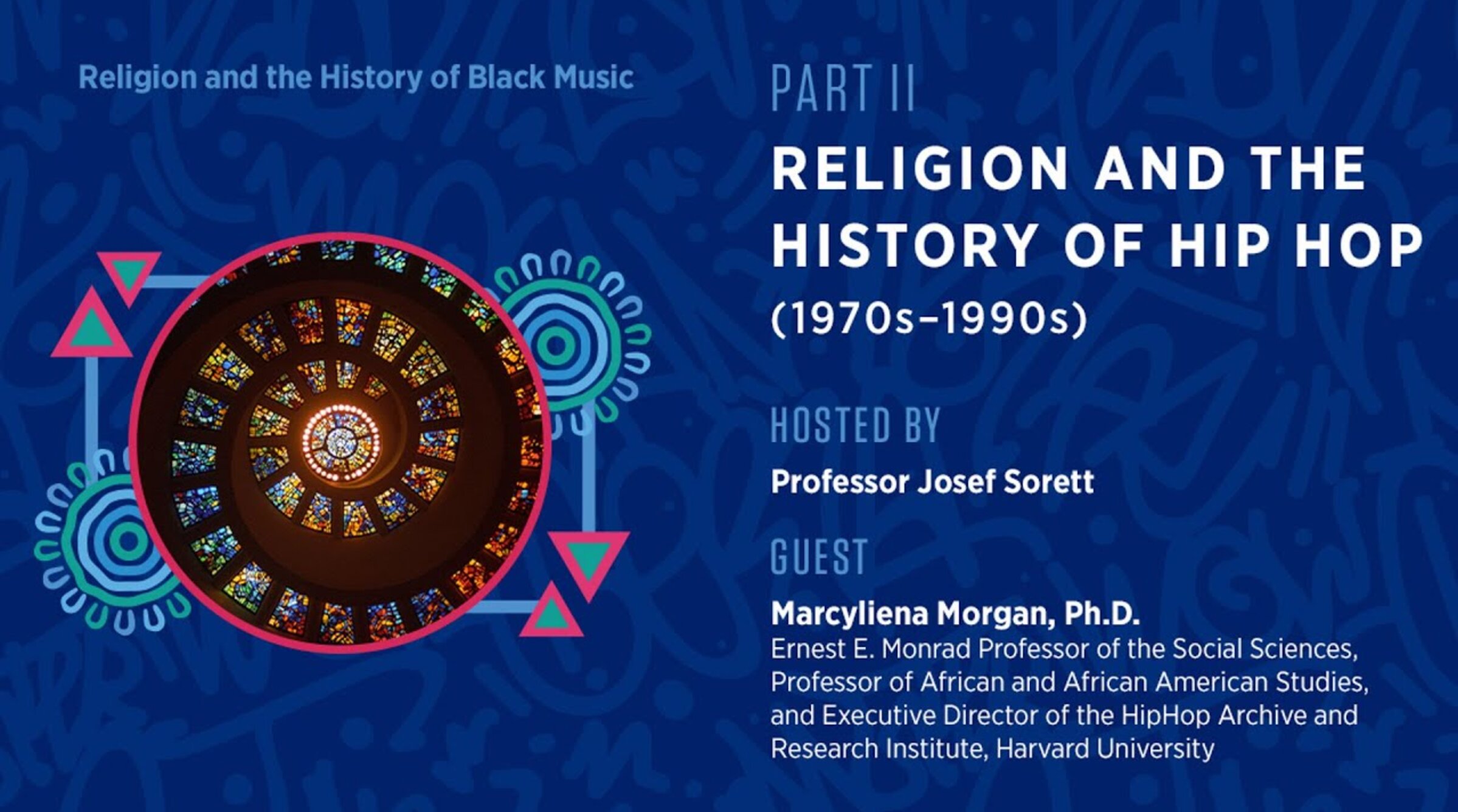 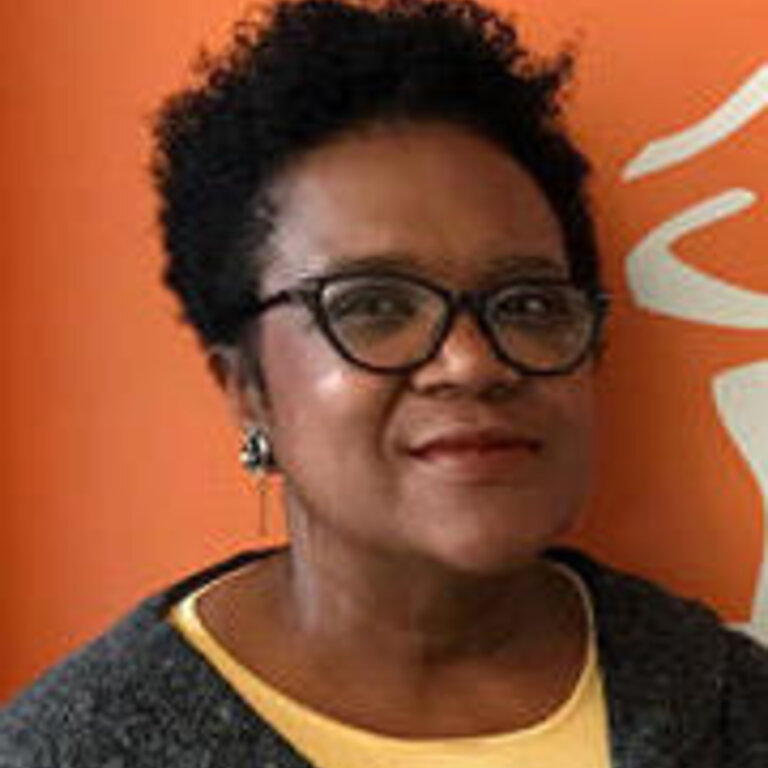 Gospel is everybody’s music. It doesn’t belong to a particular religion; it’s what you hear in the community—you know the words to the songs... It’s part of what it means to be part of the [Black American] community."

Dr. Morgan reflected on the response to hip hop in the early 1990s, recalling how many of her peers were discounting or dismissing the roles that Black men—and, by extension, hip hop—played in ensuring Black Americans’ access to resources and opportunities as well as their protection against violence. “We didn’t give ourselves credit for all the work we were doing to make this a democracy and to make sure that we’re all protected. One of the areas in which we also didn’t really pay close attention was how important health care was to us,” she said, speaking not only of fellow academics but also some BlackAmericans who were not accepting of hip hop at the time. Whether it be the Black Power movement’s provision of breakfast and other health programs for families or 2Pac’s “Brenda’s Got a Baby” song released at the height of teenage pregnancies in the U.S., Dr. Morgan challenged the idea that Black Americans didn’t participate in health care and also acknowledged how hip hop helps to reclaim the community’s leadership on the issue.

On July 23rd, Christopher Emdin, Ph.D., Associate Professor of Science and Education at Teachers College, and Timothy D. James, Chief Visionary Officer of HipHopEd, a nonprofit that explores the relationship between hip hop and education, joined the series to discuss shifts in the religious dimensions of hip hop from the 1990s through the 2010s. They discussed North Carolina rapper Petey Pablo’s “Test of My Faith” and the role that American Southern rappers played in normalizing traditional gospel sounds in hip hop. 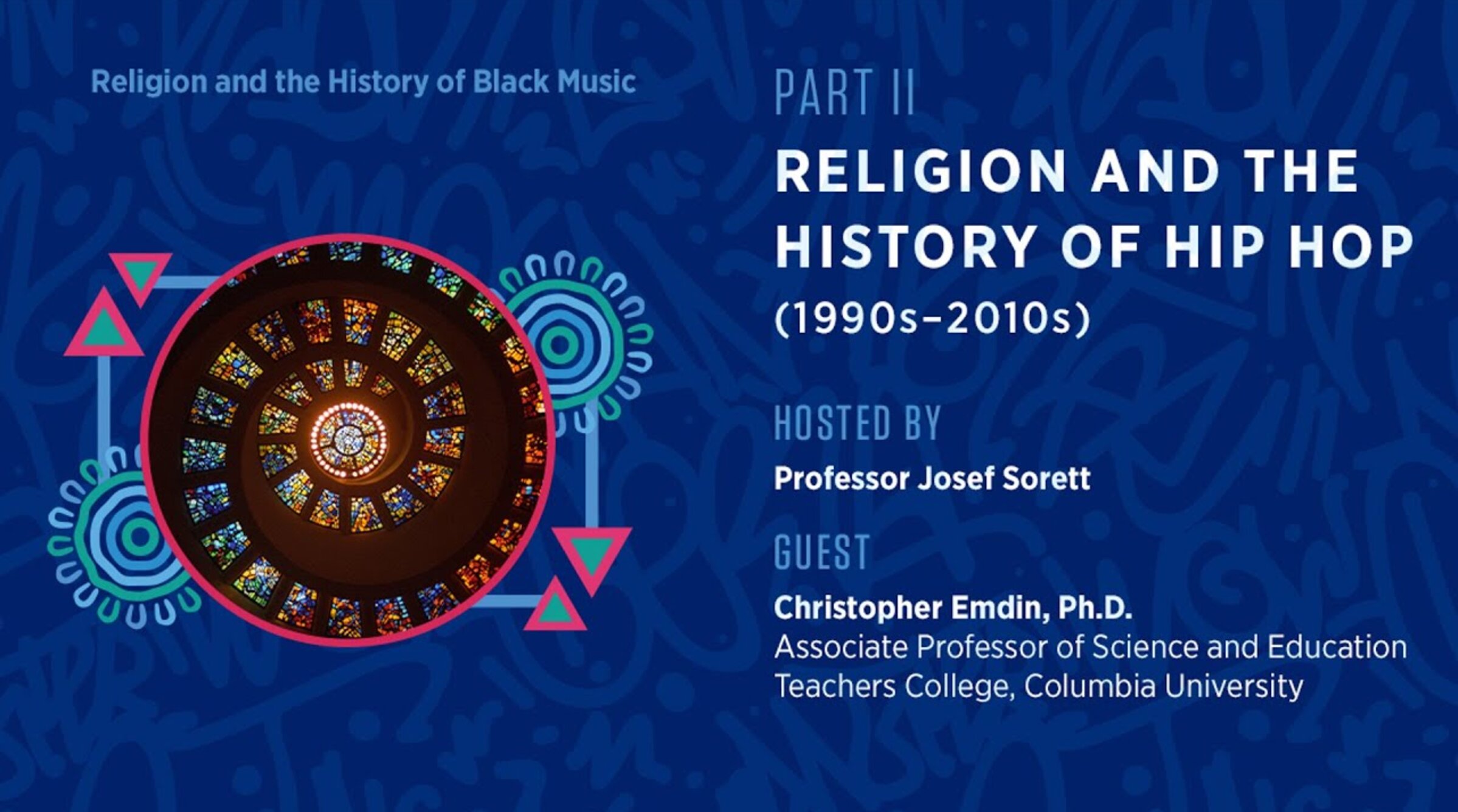 Petey Pablo’s debut album, “Diary of a Sinner,” openly discusses conflicts between his lifestyle and his belief system, his struggles with faith, and asks for forgiveness. Dr. Emdin and James agreed that the rapper’s approach to his lyrics talked about faith in a way that normalized the religious experience. “He takes away the glitz and glamor and brings it down to the core essence. Listen to the flow… even his rhyming patterns are more spoken word-ish, like an intentional breakdown away from the existing Petey Pablo to become Preacher Pablo,” said Dr. Emdin. 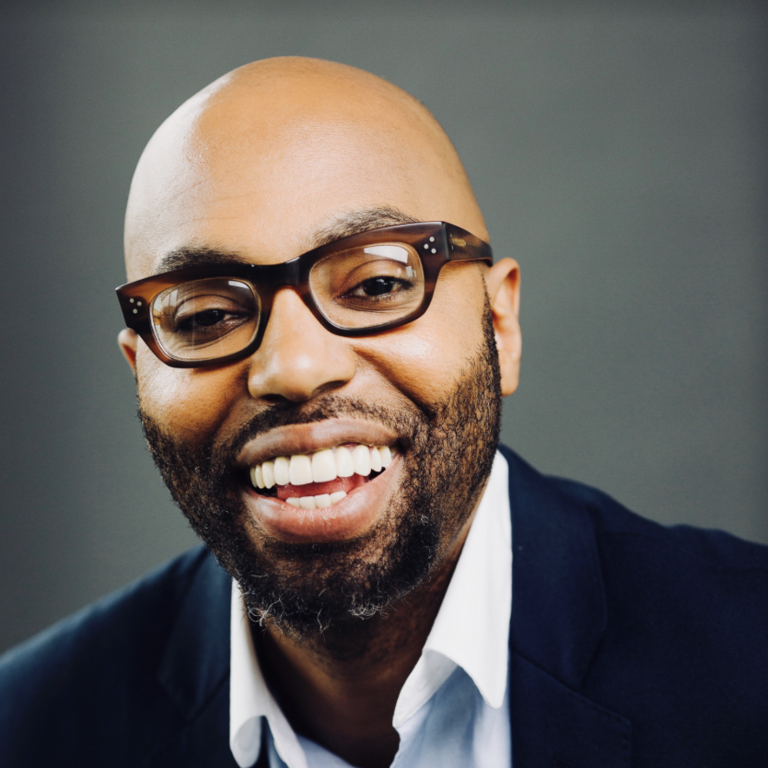 I love that juxtaposition between [Petey Pablo’s] previous self and this self and how he normalized that experience of faith and religion and made it relatable to those who have not."

“Cars are very important in all cultures, but especially in Southern culture,” said James. “So he’s talking about having half a tank of gas, two cigarettes… he realizes that the trial he was going through was not to diminish him, but to refine him as a test of his faith.” The conversation continued, listening and discussing The Game and Lil Wayne’s “My Life,” Joe Budden’s “Pray for Me,” Jay Electronica’s “Eternal Sunshine (The Pledge),” and Chance the Rapper, Jay Electronica, My Cousin Nicole’s “How Great.”

Joshua Bennett, Ph.D., Professor of English and Creative Writing at Dartmouth College, joined Dr. Sorett for the final event on August 4. They thought through songs such as Freeway’s “What We Do,” Kendrick Lamar’s “Sing About Me, I’m Dying of Thirst,” and several others that came at the intersection of hip hop and Black religious imagination--not only in the Christian tradition but also the Muslim tradition. In curating his playlist, Dr. Bennett pondered the socio-political context of the time period—a time when the U.S. has elected its first Black president juxtaposed with the economic conditions many Black Americans found themselves in at the time. He borrowed poet Simone White’s summation of rapper Vince Staples’ ethos to describe the perspectives of many rappers during this time: 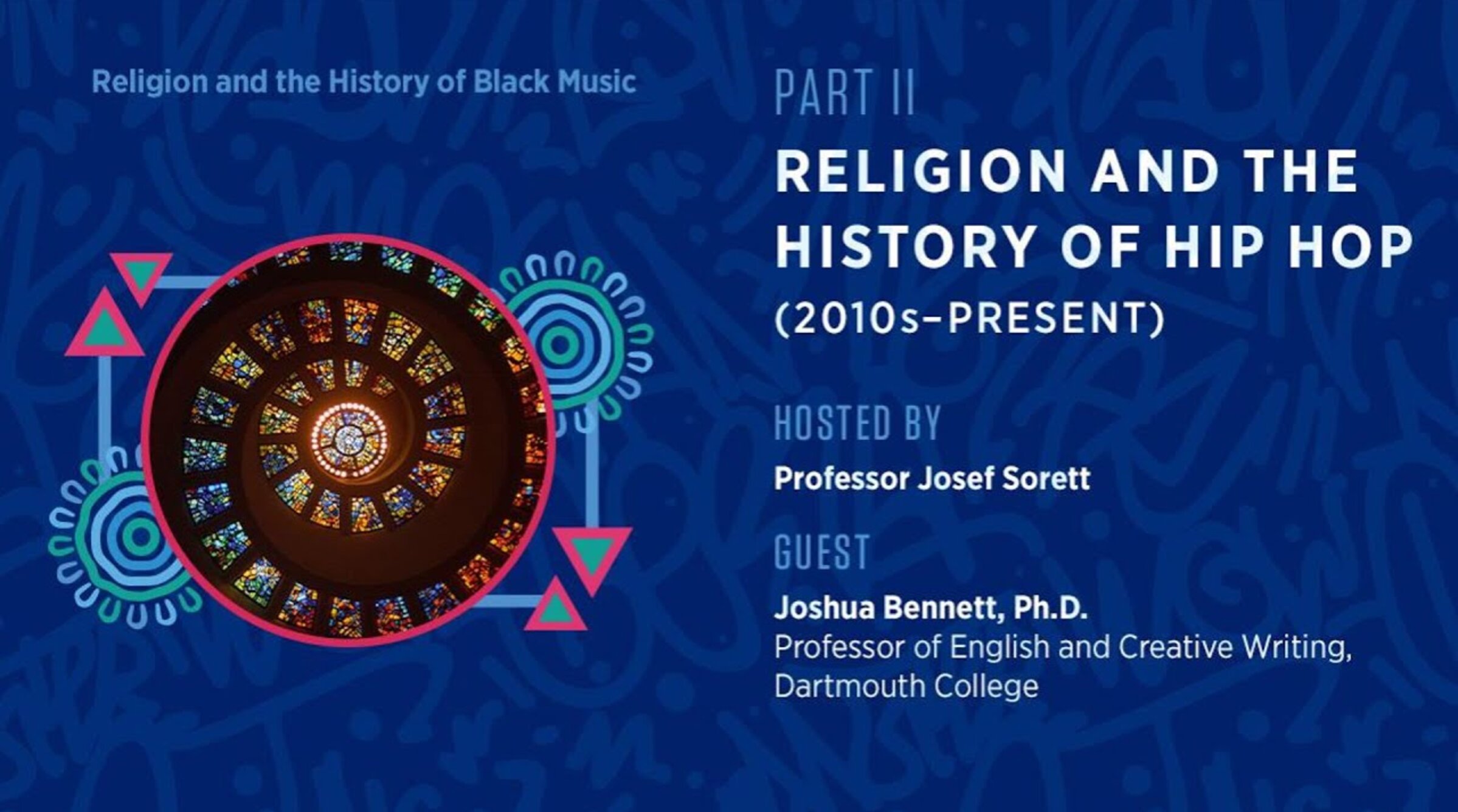 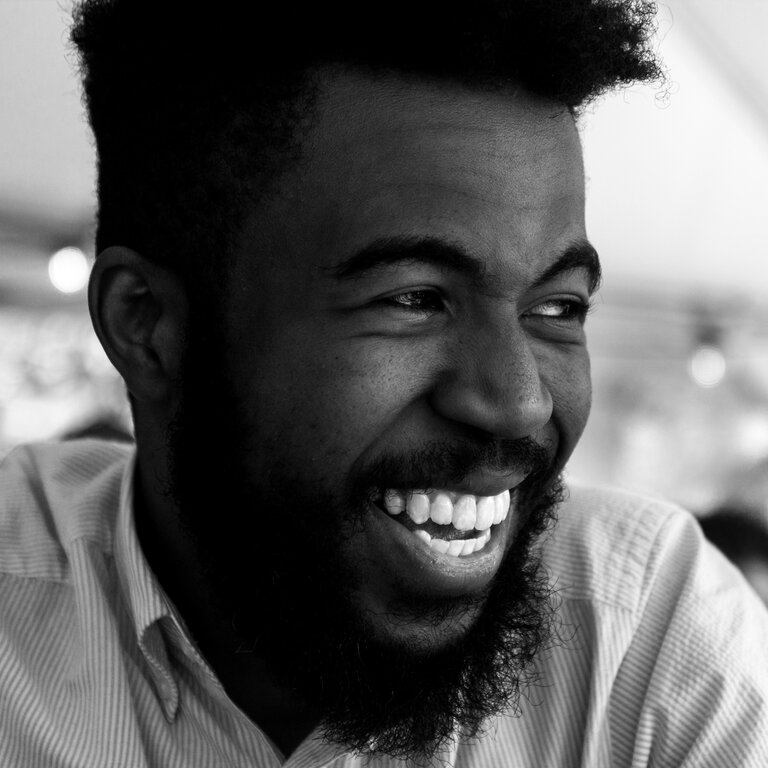 The music is not necessarily about collaboratively initiating freedom; it's actually about a kind of individualism that's created by our particular moment. In late capitalism that kind of despair and despondency and what it means to hear the voice of young people in that moment speak loud and clear."

In reflecting on “What We Do,” Dr. Bennett points out that despite Freeway’s Muslim faith, he is rapping about committing crimes to provide for his family. The hook’s acknowledgment that “even though what we do is wrong,” along with Freeway’s admission that “if the heat stop working, then my heat start working, i'ma rob me a person” captures the complexity of character but also reconciles crime as a necessary evil in response to the very limited options available to him. “That gets us to the core of the question: how do Black religious practice and Black religious imagination meet the material needs of Black people in the modern world?”

In “Alan Forever,” Chicago rapper Lupe Fiasco, who is also Muslim, imagines an afterlife for a young immigrant boy who was killed in 2015: “He just imagines this robust plane, with the moon as the disco ball, they get to be in submarines with dinosaurs... I think one of the roles of the poet is to dream of a world where that could have gone another way, and I think also imagine the best possible world for them in the hereafter.”

Religion and the History of Black Music was a six-part event series led by Josef Sorett, Professor of Religion and African American and African Diaspora Studies at Columbia University. Held May 26–August 4, 2021, the series ran in coordination with Dr. Sorett’s two Columbia Summer Session courses – Gospel Music in Modern America and Religion and the History of Hip Hop. These events convened scholars, musicians, media professionals, and fans for a discussion of the evolving role of religion in shaping the history of Black music.

Senior Lecturer Greg Witkowski Quoted in MarketWatch: How the Spite Philanthropy Storyline in HBO’s Succession Plays Out in Real Life

Dr. Witkowski coined the term “spite philanthropy” in an Op-Ed for The Chronicle of Philanthropy earlier this year.

Direct, indirect, and induced job growth are the essential ingredients to infrastructure investments.

Gregory Robinson, Director of the NASA James Webb Space Telescope, will join a panel hosted by the IKNS program.