Bioethics Lecturer Harriet A. Washington Challenges the Medical Community to Shift the Narrative About Race and Research 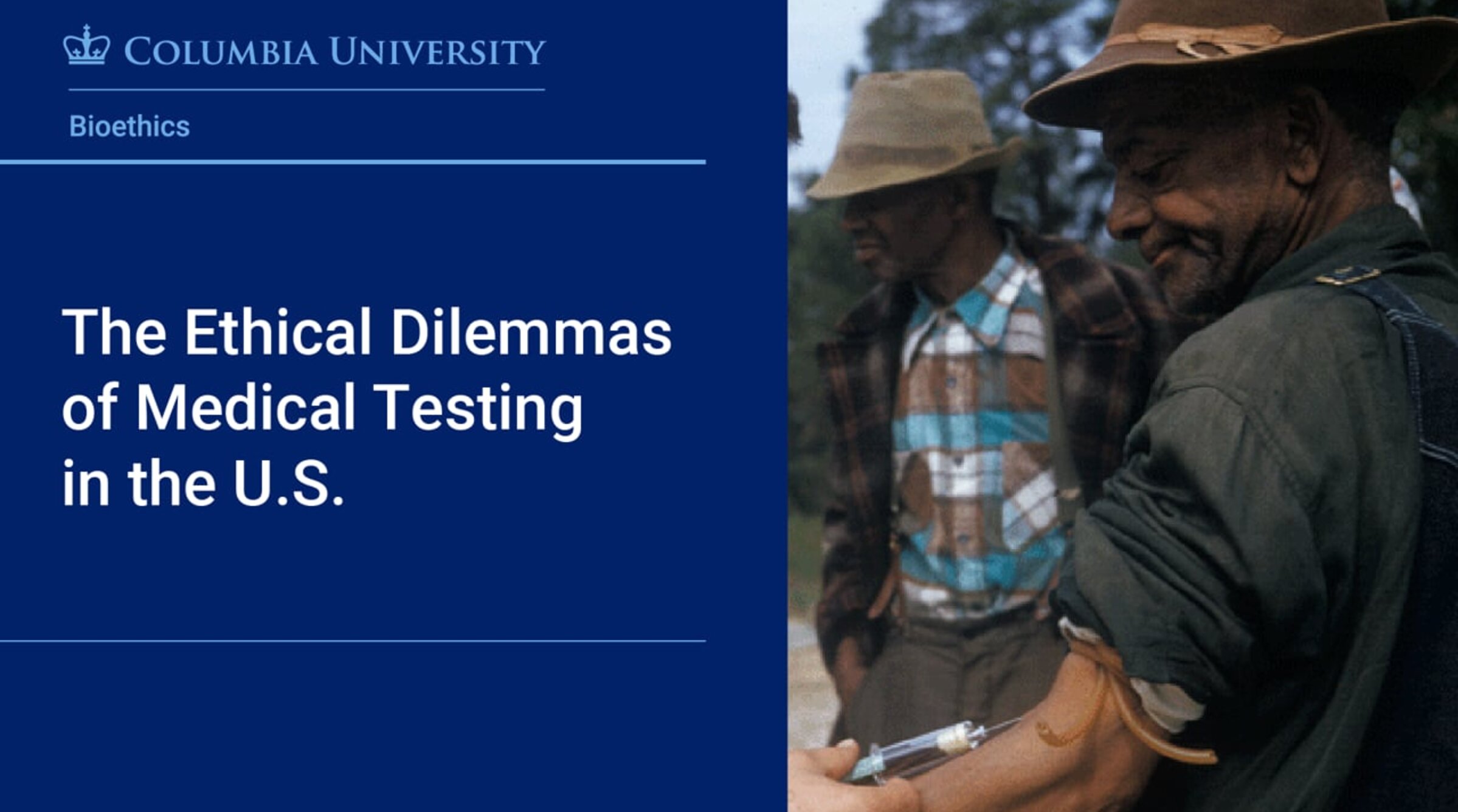 Nearly three years ago, the Aurora, Colorado, coroner’s office declared the cause of death of an otherwise healthy 23-year-old Black man as “undetermined.” Elijah McClain, standing at 5-foot-6-inches and 143 pounds, was confronted by police officers after receiving a call about a suspicious person. Neither armed nor a suspect of a crime, McClain was forced to the ground and injected with 500 mg of ketamine—a dosage appropriate for a person of 220 pounds, according to the paramedics’ estimation. McClain went into cardiac arrest and eventually into a coma. Less than a week later, he was declared brain dead and taken off life support.

The tragic circumstances of McClain’s death include serious and ethical questions about the use of ketamine in a non-medical environment, including in the role of law enforcement. One researcher is sounding the alarm. “He died in a research study that no one ever asked him if he wanted to be in, that he never even knew that he was in, and that was never publicly identified as a research study,” says Harriet A. Washington, a medical ethicist, lecturer for Columbia University’s Bioethics M.S. program, and author of Medical Apartheid, winner of the 2007 National Book Critics’ Circle award. “And yet, [McClain] was enrolled in it, and he’s dead based on nothing more than police looking at him and deciding to confront him,” Washington added.

Ketamine, also known as “Special K,” is a powerful anesthetic that has been linked to breathing problems in people who received it outside of a hospital; 40% require a ventilator within 24 hours and according to a study of ketamine-related cases in 2019, 23% experienced decreased respiratory rates, some of which were fatal — like in the case of McClain. And it was perfectly legal.

The McClain case is just one example that illuminates the complex, interconnected nature of medicine, ethics, policing, and racism. While these data are not aggregated by race, in Colorado, where McClain resided, the Colorado Department of Public Health and Environment confirmed that first-responders have used ketamine 427 times between 2018 and 2019 without obtaining consent, for example.

How does this happen in a country that prides itself on individual liberties and an advanced health care system? “Most people think that they can’t be made to take experimental medication without their permission. All of that changed in 1996,” Washington explains. In courses such as Journalism and Bioethics and Race and Bioethics at Columbia, Washington is calling attention to the federal loopholes that enable these practices. She challenges students to reframe key bioethical issues such as voluntary informed consent, especially among African Americans who have been disproportionately targeted and harmed in medical research studies.

As part of her work, Washington is shifting the narrative about medical mistrust among African Americans by unearthing shocking and difficult facts she has found in medical journals, the Surgeon General’s Index, slave narratives, and even doctors’ memoirs. Her seminal book, Medical Apartheid, consists of more than 400 pages documenting specific cases of exploitative and abusive experiments conducted mostly or exclusively on African Americans from the 18th century through the present. It draws from experiments conducted throughout history, from those performed by Dr. J. Marion Simms, sometimes called the “father of modern gynecology,” on enslaved African American women in the 1840s to a joint 1990s Columbia University-Psychiatric Institute-led study that tested the drug fenfluramine exclusively on Black boys (including Black Hispanics) between six and ten years old to “predict” aggression.

“We have to abandon constantly referring to the Tuskegee Syphilis Study when discussing medical racism,” Washington asserts. “Health equity researchers Dr. Thomas A. LaVeist, Dr. Lydia A. Isaac, and Dr. Dwayne T. Brandon published a series of articles documenting that African Americans who had never heard of Tuskegee were actually more likely to fear medical research than those who had. So we need to retire the myth that the Tuskegee Study is the singular reason why many African American patients do not trust medical research.”

Today, public discourse is much more open about acknowledging and remedying medical racism, particularly against African American patients. Thanks to publications like The 1619 Project by Nikole Hannah-Jones and the “racial awakening” of 2020, Washington says there is a greater awareness of the history and present context of racism, including medical mistreatment, in the U.S. “We’re now seeing people other than African Americans and civil rights leaders make the connection between civil rights and preserving the rights, dignity, and health of African Americans in the medical arena.” That shift leaves Washington feeling optimistic that better policies will be generated.

Washington also thinks that there should be stiffer punitive measures against people who violate ethical rules. “We need to institute legally binding rules and guidelines for both institutions and independent practitioners,” she contends. “We know that health care providers want to heal people; we want to give them the benefit of the doubt and usually it's warranted. But the reality is, if you don't punish someone for consistently breaking the law, they have no incentive to stop. And that's exactly what we're seeing in medical research today — the same kind of breaches over and over again. We need to end them, which means we need to have meaningful consequences for breaches of these ethical strictures.”

Washington maintains that medical research is critically important, and that good research must include human subjects who are representative of the population. In addition, research can help to lessen or eventually eliminate persistent racial health disparities. Black Americans continue to die at the highest rates due to cancer and stroke, two of the leading causes of death in the U.S., according to the National Institutes of Health and Centers for Disease Control.

“Common ailments,” she writes in Medical Apartheid, “are more often prevented and treated among Whites than Blacks.” Some of the contributing factors are later detection and less aggressive treatments as well as a “dearth of therapeutic medical research that is meant to help treat or cure a patient with a disorder. But this dearth of therapeutic research is accompanied by nontherapeutic research within African Americans, which is meant to investigate medical issues for the benefit of future patients or of medical knowledge,” she writes, not necessarily for the benefit of the person participating in the study.

To achieve greater mutual trust between vulnerable people and practitioners, she says the following criteria should be met: the benefits of research should outweigh the risks; it should maintain the subjects’ dignity; and they should know that they can withdraw their participation at any time. “Medical research should require a person’s voluntary consent,” she says. “Voluntary consent is not redundant. The fact is you can get people's consent in many ways. You can pay people enough money that may compel them to consent to things that they know that they should not. You can also force people to consent. For example, I don't think we ought to do research in prisons because prisons are an inherently coercive environment. It's very hard to say no for a variety of reasons.”

Last summer, after drawing national attention due to McClain’s death, Colorado passed a new law restricting police from directing paramedics to administer ketamine and requiring medical professionals to weigh an individual before injecting the powerful drug. And two months after Colorado Attorney General Phil Weiser identified patterns of racial bias in Aurora policing, the city agreed to pay $15 million to the McClain family to settle their civil rights lawsuit. But the federal loopholes for consent still exist, enabling paramedics and police officers to administer experimental drugs to unwitting individuals in other states.

In Minneapolis, just two months after George Floyd was killed in police custody, another Black man named Max Johnson was reportedly sent to intensive care after being injected with ketamine by EMS workers; his partner had called 911 for help with his diabetic seizure. The incident renewed scrutiny on the city’s use of ketamine on people being detained or arrested by police officers. “There are thousands and thousands of people in the United States who have been used in medical research without ever having given their permission or opinion and sometimes without ever knowing they were in a research study at all. Some of them have died in those research studies. This is a matter of fact—a matter of record; there's no contention about it. Do we want to be that kind of country?” Washington asks.

Washington hopes that academic programs like Columbia’s M.S. in Bioethics will help to answer these questions by producing medical practitioners, lawyers, policy-makers, and other leaders who will usher in a new era of stronger, more ethical institutional policies and guidelines leading to greater research outcomes for all.

A More Constructive Way to Think About Carbon

Christoph Meinrenken on the World Cup, a multidisciplinary approach to research, and sustainability beyond carbon.

Dr. Reiss turned the lessons of her Art and Sustainability course into a class at the largest science museum in Italy.

Narrative Medicine Lecturer Olga Torres on the experience that led her to the program and the importance of listening to patients’ stories.