In the Crucible of Change: Experts Navigate DEI at the Crossroads

Organizations must undertake the urgent effort of developing and integrating sustainable Human Capital Management (HCM) and Diversity Equity and Inclusion (DEI) strategies. To do so, they must build diversity capability and overcome both internal and external resistance, according to Dr. Edna Chun, Lecturer in Human Capital Management, at Columbia University’s School of Professional Studies. The message was clear and consistent in a series of conversations on the topic hosted by three of Columbia’s School of Professional Studies Master of Science programs - Negotiation and Conflict Resolution, Nonprofit Management and Human Capital Management (HCM). This special series of eight events focusing on Diversity, Equity and Inclusion was capped off with a virtual panel titled “In the Crucible of Change: DEI at the Crossroads,” that featured Human Capital Management faculty and industry experts from both higher education and the corporate world to discuss the daunting project of cultural transformation. 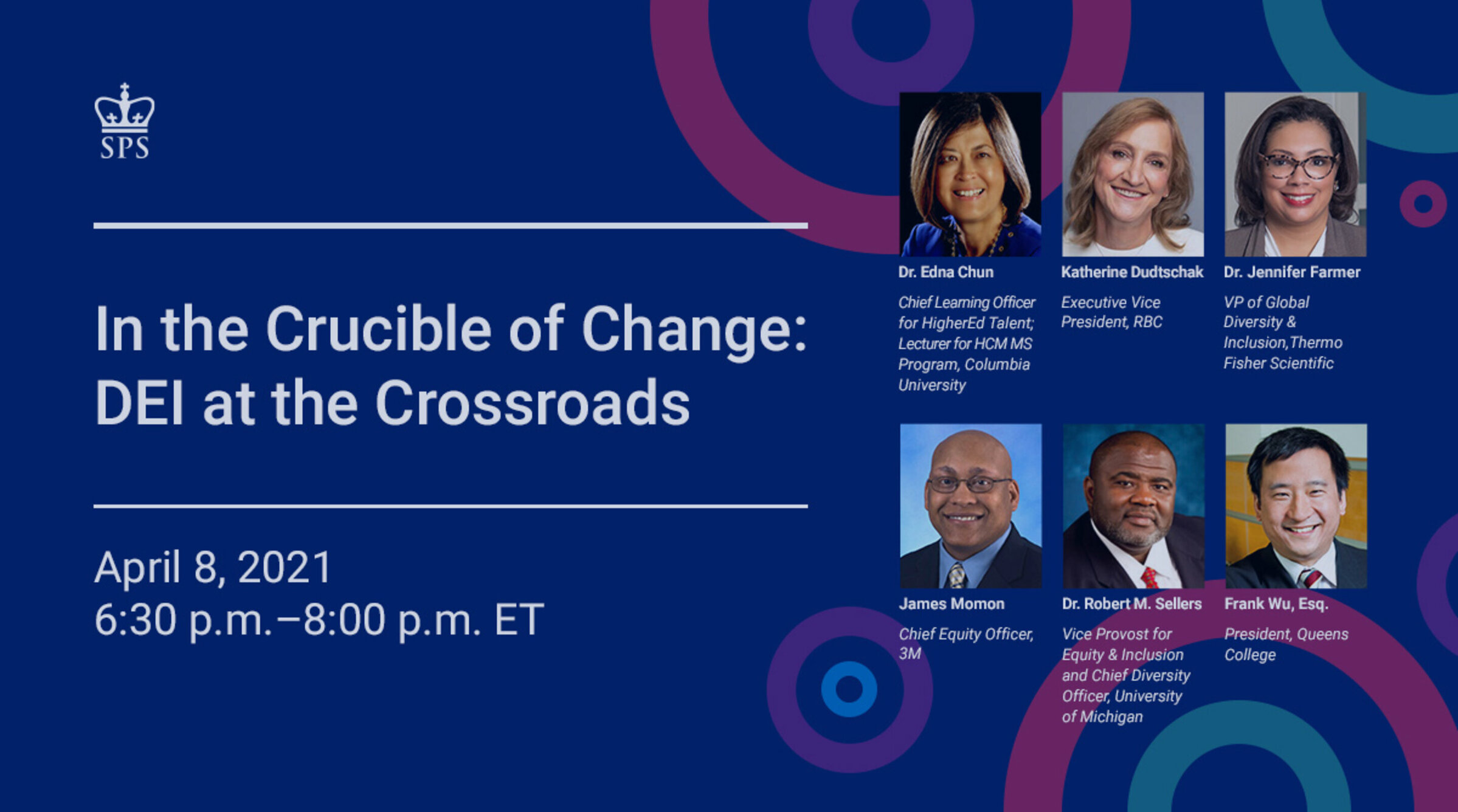 Dr. Chun, a nationally recognized DEI expert, asked, “In one sense have we been here before, but from another perspective, is our current moment different?” The panelists agreed that this time is different but organizations must invest time and effort. Dr. Jennifer Farmer, VP of Global Diversity & Inclusion, Thermo Fisher Scientific, shared that she sees a possibility for change, but noted there are key components that must be considered. “The George Floyd incident, as horrible as it was, really was a wakeup call for many of us across this nation, across the world,” she indicated. Citing the current environment that has prompted an increased drive toward action, Dr. Farmer noted, “We’ve seen the huge response from corporations,” including her own corporation. “We have to put the true time and effort into this, but also bring our leaders along in this process,” she explained, noting that true progress is not simply a surface change, but rather “getting to the point where we’re embedding DEI into every single thing that we do, so that it becomes a way of life, becomes a part of our culture.”

Echoing the call for leadership commitment in other sectors, both in terms of time and resources, Dr. Robert M. Sellers, Chief Diversity Officer and Vice Provost for Equity & Inclusion, University of Michigan offered an overview of  the university’s five-year diversity strategic plan. From his perspective, “We’ve been able to make DEI a central part of how the university operates.” He described how this holistic approach impacts everything from admissions and recruitment, to hiring faculty, to supporting staff to work within the local community: “It’s not as an add-on,” he said. “But as the core mission.” However, Dr. Sellers cautions against an undue focus on individuals versus structural inequality. “One of the things that I worry most about most,” he advised, “is that we will spend more of our efforts addressing the intrapersonal and interpersonal issues and less of our efforts on addressing inequalities that may actually be fundamental to our society.”

As the President of Queens College, Frank Wu shared his insights as a higher education thought leader. Speaking of the nation’s current heightened awareness of racial injustice, Mr. Wu advised, “We now have a fragile consensus that this is wrong, and we need to do something about it.” He noted that, similar to many other CUNY students, he is the child of newcomers: “Although I was born here in the United States, my parents came from China via Taiwan in the early 1960s,” He described common microaggressions Asian Americans experience including being told to go back to their own country and being praised for speaking English well despite the fact that they may have been born here. He also noted the growing awareness of many first generation Asian Americans of social issues related to diversity and inclusion. When individuals and organizations ask him how to fix societal issues, he stated that there isn't one fixed solution: “It’s a process, not an outcome. Diversity is like democracy.” As he explained, “Democracy is something we participate in. Diversity is the same. It demands our engagement and constant effort, and if we don’t see that, we’ll be disillusioned.”

How can such efforts be sustained? James Momon, SVP and Chief Equity Officer at 3M, emphasized that maintaining momentum in diversity efforts is a key challenge for many DEI professionals. Mr. Momon cited the renewed national conversation in the wake of George Floyd’s killing, but also noted that he continues to look ahead. “How do we keep folks’ attention and engagement,” he asked, “because George Floyd will become a distant memory not too far from now?’ He indicated the importance of maintaining the energy and the commitment that we’ve seen over the past year as we have been able to break through more surface-level discussions about uncomfortable topics. “I am optimistic, because the conversations are more honest and more real,” observed Mr. Momon, as he described a change in terms of “the language around systemic racism, the honesty and the transparency by which we’re talking about these issues has changed.”

The panelists discussed the multi-faceted nature of diversity, and in this context, Katherine Dudtschak, Executive Vice President of Personal Commercial Banking at RBC relayed how her own experiences in gender transition have influenced her optimism about the future. In her role as in Canada, Ms. Dudtschak described the difficult decision she made: “I promised myself I would face my truth while retaining my job. I have been met with the kindest of humanity on my journey.” Looking beyond her organization, she sees reasons for hope coming from two sources -- first from CEOs, acknowledging that they “know and believe that there is massive lost opportunity in their customer base and in their employee base by the lack of participation, lack of social and economic inclusion.” And secondly-- “Our young people; my children were not brought into this world with the level of judgment and bias that we were,” Ms. Dudtschak observed. “Longer term, our young people, I believe, will grow up to be more socially aware and inclusive human beings.”

Said Columbia’s School of Professional Studies MS in Human Capital Management program director, Dr. Steve Safier, “It will take leaders, such as our panelists and Dr. Chun, to help their colleagues make DEI a priority, to have the tough conversations and to hire and develop a diverse workforce. In fact, the entire array of Human Capital Management programs -  Talent Acquisition; Performance Management; Learning and Development; Reward; HR technology… even the data we collect to inform our people-related decisions and the way we make those decisions, need to be examined to make sure we are enabling socially aware, equitable organizations. And that’s how we are developing our students. There’s a long road ahead and we have begun the journey. It’s up to each of us to stay the course.”

The Columbia’s School of Professional Studies series of events focusing on diversity, equity, and inclusion may be over for now, but these issues will remain a priority for both our program and the broader Columbia University community. To stay up to date with future conversations about HCM and DEI strategies that build diversity capability, follow the Human Capital Management program on LinkedIn and check for future event updates.

The book offers methodology for leaders to measure risks in potential decision-making along an uncertainty spectrum.

The Columbia Global Centers Nairobi panel discussed how mentorship is one of the key ways to help women in STEM.

Former Hearst President and M.S. Nonprofit Management Alum Michael Clinton to Publish “Roar Into the Second Half of Your Life”

Michael Clinton, ’21SPS, is a seasoned publishing executive, with over forty years of experience in the magazine industry.