In order to deliver the best and safest program for our students, all programs will move to online learning for Summer 2020. We are excited to deliver dynamic and engaging courses and cocurricular activities online. Applications remain open, and we encourage students to apply. Learn More.
Close alert

Break Out Your Barbaric Yawp: Join Karen Karbiener, Columbia Summer Lecturer and Walt Whitman Scholar, in a ‘Song of Myself’ Marathon

In 2001, Karen Karbiener received her Ph.D. in Comparative Literature from Columbia and ever since she’s been teaching eager students about the romantic poet Walt Whitman during Columbia Summer. This summer marks 20 years that Karbiener, a foremost expert on the poet and his relationship to New York, has been offering a Walt Whitman course for Columbia students.

“Though the syllabus has changed every year–as has the city, from pre-9/11 perfection to this summer of social distancing–my students continue to be inspired by Whitman's life-affirming, all-embracing words,” Karbiener said. “And the spirit of the city that enabled a grammar school dropout and carpenter's son to become America's poet, energizes them as well. The hundreds of creative, curious, and fantastically diverse students that have taken 'Walt Whitman and New York' through the past two decades have given me a sense of continuity, and yearly reminders of the important place Columbia holds in my life.”

This weekend, on May 31 at 1 p.m., the SPS community can join in celebrating the poet through a 24-Hour “Song of Myself Marathon,” which Karbiener founded and has organized for the past 17 years. Though it looks a little different this year as the event is being held virtually through livestream due to Covid-19, Karbiener guarantees it will be revitalizing.

We caught up with Karbiener to learn more about the event, her class, and what Walt Whitman can teach us about living through difficult times:

How did the "Song of Myself” Marathon originate and for how long have you been running it?

I created the "Song of Myself" Marathon 17 years ago to keep Whitman's "barbaric yawp" reciting over the roofs of his beloved New York.  It's a yearly celebration of Whitman's life-affirming epic, written and printed not far from its usual location in Brooklyn Bridge Park.  This year, we're missing those spectacular views of Manhattan, the East River and the Brooklyn Bridge because of park closures and social distancing guidelines.  But I'm thrilled that the world is participating in New York's first online Marathon–our readers and viewers demonstrate Whitman's global reach, even on his 201st birthday.

Though the syllabus has changed every year–as has the city, from pre-9/11 perfection to this summer of social distancing–my students continue to be inspired by Whitman's life-affirming, all-embracing words.

How can the SPS community be involved with this year's marathon?

Please tune in on Sunday, May 31st–Whitman's 201st birthday–at 1 p.m. EST for the live broadcast of the "Song of Myself" Marathon!  Our readers this year include poets, printers, activists, waiters, performance artists, musicians, students, teachers, partners and parents and children and friends... in Walt's own words from his beloved "Song" (section 15):

And these tend inward to me, and I tend outward to them,

And such as it is to be of these more or less I am,

And of these one and all I weave the song of myself.

Viewers will be able to write comments, and to watch the performance live now (or a recording of it later) at the Walt Whitman Initiative YouTube channel. 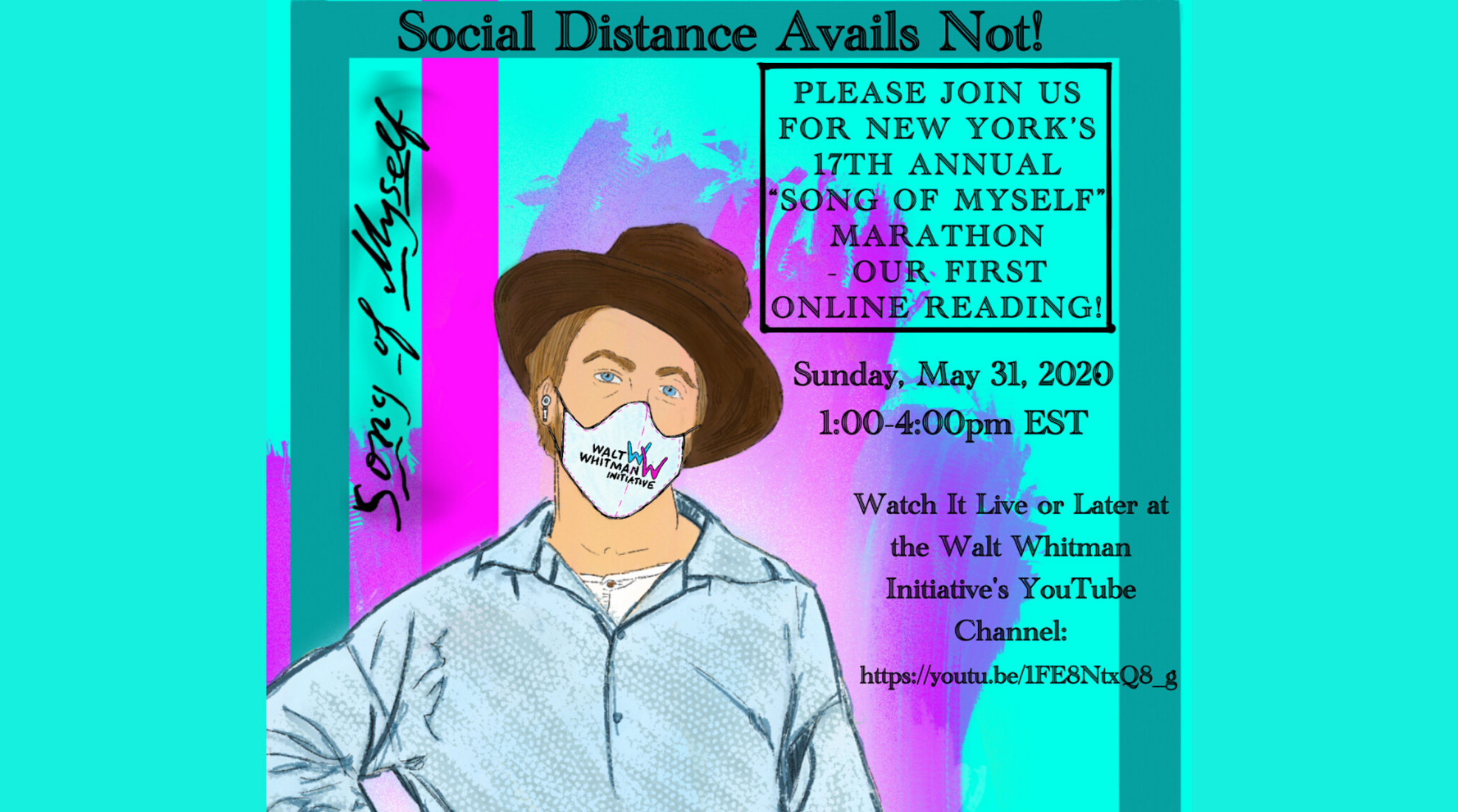 Tell us a little bit more about "Poet of the Body: New York's Walt Whitman." How does the course approach Walt Whitman?

How did a carpenter’s son, grammar school dropout, and sometime hack writer become America’s poet? "Poet of the Body: New York's Walt Whitman" highlights the city's role in the extraordinary transformation of Walter Whitman Jr. to “Walt Whitman, a kosmos, of Manhattan the son.” Whitman and New York came of age together; before he left New York for the Civil War front in 1862, he had found his voice and a sprawling seaport town transformed itself into a world class metropolis.

In this class, we strive to connect with the spirit of the city that so motivated this poet, as well as the “urban affection” Whitman invented and shared with the world.  We do so by exploring the poetry, journalism, letters, and other prose works (including Whitman's recently rediscovered self-help manual, Manly Health and Training) that Whitman produced during his New York years, and also by taking weekly walking tours through his favorite Brooklyn and Manhattan neighborhoods-- and, when students are game, a bike ride through Whitman ancestral lands in West Hills, Long Island.  One of the ways we reflect on Whitman as the self-declared "poet of the body" is by studying the books he wrote, designed and printed: students visit the world's finest Whitman archives and learn about archival practice, and also receive hands-on instruction in 19th century printing and bookmaking techniques.

Does Walt Whitman offer any insight for us in this trying time? Any passages/lines that are especially resonant now?

By his own account, Whitman "understood the large hearts of heroes."  In his own lifetime, he experienced some of New York's most destructive fires, cholera and yellow fever outbreaks, and witnessed first-hand the great personal losses of the Civil War as a volunteer nurse.  Through these experiences, his empathy prevailed.

And in lines loosened from the grips of rhyme and meter, the self-declared 'poet of the body' reminds us of the everyday pleasures of being human-- all worth remembering, all worth fighting for:

I have perceived that to be with those I like is enough,

To stop in company with the rest at evening is enough,

To be surrounded by beautiful, curious, breathing, laughing flesh is enough,

To pass among them, or touch any one, or rest my arm ever so lightly round his or her neck for a moment—what is this, then?

I do not ask any more delight—I swim in it, as in a sea.

There is something in staying close to men and women, and looking on them, and in the contact and odor of them, that pleases the Soul well,

(from "I Sing the Body Electric")

Learn more about Columbia Summer sessions, “Poet of the Body: Walt Whitman and New York,” and the Walt Whitman Initiative.

The article discusses the genesis of the program and notes the growing need for wealth management professionals.

Ober presented on the topics of writing and remote English language instruction to faculties in China and Mexico.

Making the Most of a Virtual Internship This Summer

A virtual internship can still be a great learning experience and a résumé builder.