Columbia will continue to require the wearing of non-cloth masks in instructional spaces for Summer sessions. Please ensure you have a green pass on the ReopenCU app. Learn more.
Close alert
Thursday
2021
when
6:00 pm–7:30 pm EDT
what
Public Event
where
Online
Back to all SPS events
DEI Series events
Featured SPS Events 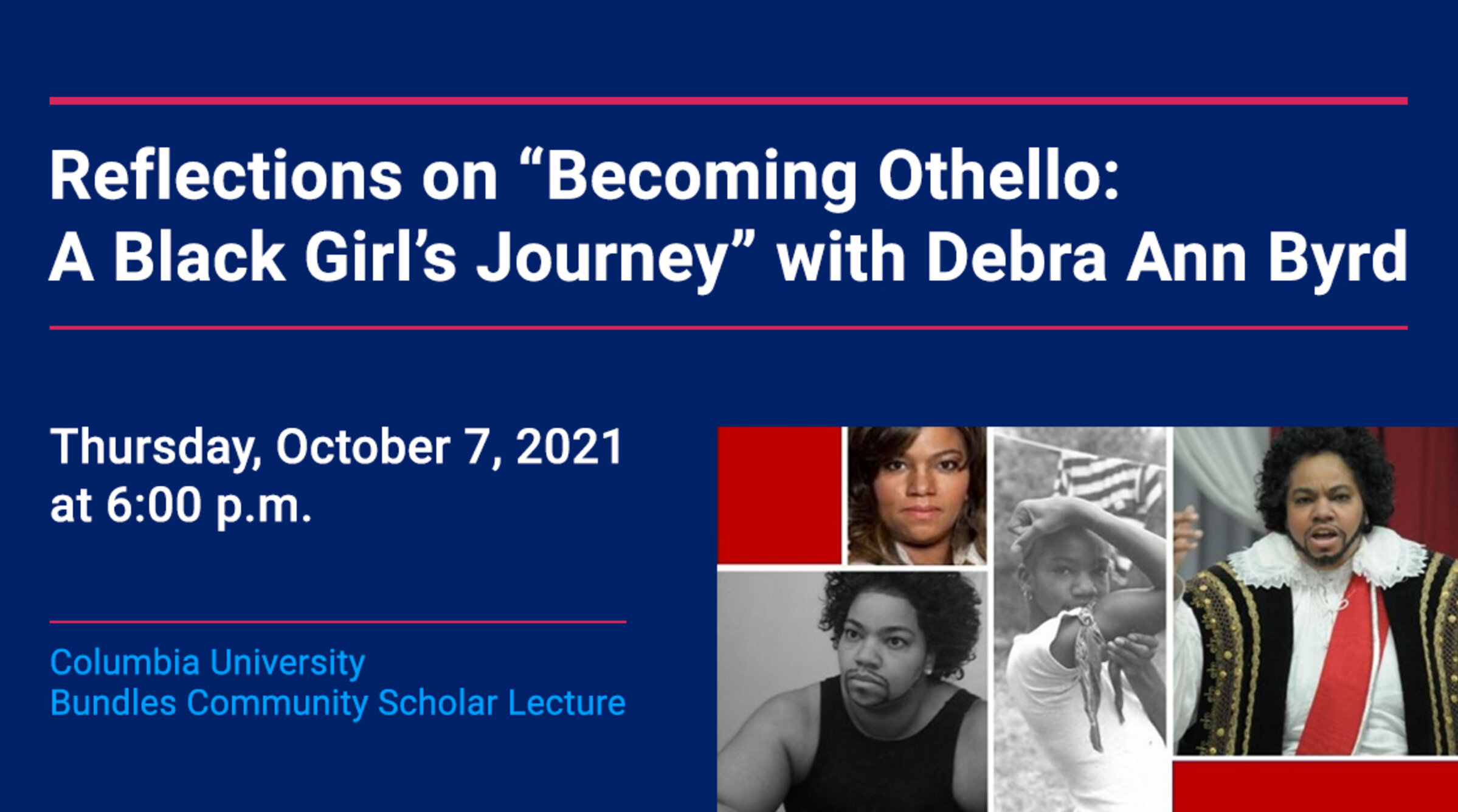 In this multimedia virtual lecture, Bundles Community Scholar Debra Ann Byrd will reflect on the years-long experience and process of creating and starring in BECOMING OTHELLO: A Black Girl’s Journey. Described as a living memoir, BECOMING OTHELLO is a theatrical production with lyrical language, soulful songs and the music that shaped the life of a resilient little girl growing up in Spanish Harlem. The solo show flows from Debra Ann’s recounting of her ancestral lineage to her arrival at a crossroad in life, while taking us through her joy-filled and tumultuous youth; a fateful encounter with a company of Shakespearean actors and her remarkable, gender-flipped journey on the road to becoming Othello.

In July 2021, Wall Street Journal theater critic Terry Teachout described the new show as “riveting” and exclaimed, “Like Hal Holbrook’s ‘Mark Twain Tonight!’ or John Gielgud’s ‘Ages of Man,’ it’s the kind of solo show that an actor so inclined can spend the rest of his or her life playing in every corner of the English-speaking world.”

Debra Ann Byrd is a fifth generation Harlem resident with a background in the performing arts as an actor, producer, arts manager, and business leader. Since beginning her career in the arts in 1990, she has appeared in productions across the country and founded Take Wing and Soar Productions and the Harlem Shakespeare Festival. She has also received many awards, including the NAACP Shirley Farmer Woman of Excellence Award and the 2013 Take Wing And Soar Founder’s Award. Ms. Byrd has a Bachelor of Fine Arts in Acting from Marymount Manhattan College, as well as further training at Shakespeare & Company, the Public Theater’s Shakespeare Lab, and the Arts Leadership Institute at Columbia University and Teachers College.

The Columbia University A’Lelia Bundles Community Scholars Program, administered by the Office of Government and Community Affairs and the School of Professional Studies, enables independent scholars to pursue their lifelong learning aspirations, whether it be completing an independent project or attaining skills in a particular area. The program helps to foster and deepen ties between the University and the many independent members of the cultural and intellectual community surrounding it. The program was named in honor of longtime University Trustee A’Lelia Bundles in 2020.