A panel moderated by Political Analytics program founder Professor Gregory Wawro explores what the midterms reveal about the state of the country.

As the 2022 midterm elections approach, the current state of domestic and world affairs have made the stakes on November 8 as high as ever. A third of the seats in the Senate and all seats in the House of Representatives are up for reelection. Thirty-six states will hold gubernatorial elections and forty-six will hold legislative elections that could have significant consequences well beyond the 2022 midterms. Intensified scrutiny of campaign funding and spending, political polling, and election forecasts have created an even greater demand for more sophisticated and precise data modeling to understand sentiment and influence political activity. 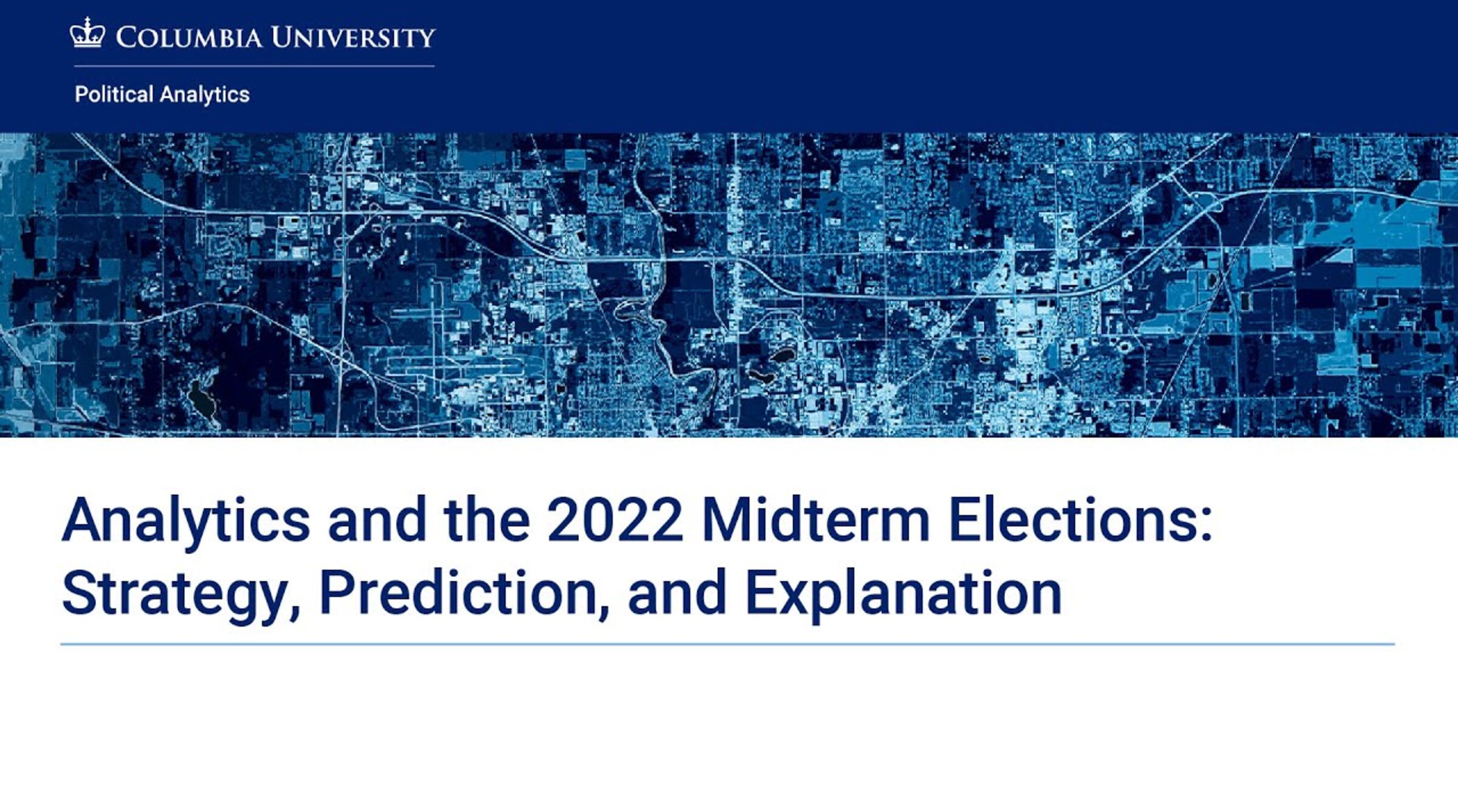 “There is usually less attention paid to midterm elections than there are to presidential elections,” said Professor of Political Science Gregory Wawro, founder of Columbia’s new M.S. in Political Analytics program. “But it is hard to imagine the stakes being higher than what we’re facing, given the kinds of candidates who are running in this election, what they are campaigning on, and how we expect policy to change if the elections turn out one way versus another.” Professor Wawro recently moderated a panel discussion with faculty from the Columbia Department of Political Science and political professionals to discuss the unique challenges analysts and strategists have faced this election cycle, and what we can learn from the torrent of data surrounding the midterms. “Analytics and the 2022 Midterm Elections: Strategy, Prediction, and Explanation,” was held on October 24 at Columbia University. The panel was the first event in a series being hosted by the new M.S. in Political Analytics program at Columbia University.

What is unique about midterm elections?

“Midterms are a verdict on how the president and party in power are doing,” said Murray. “They are often more revealing, more interesting, and more surprising than presidential elections. I see them as a foreshadowing force.” She walked through the last few cycles of midterm elections, and how the results revealed bigger themes in politics than pundits could have predicted before the votes were tallied. “Remember when people were really mad about Obamacare?” The 2010 midterm elections swung the House from the Democrats to the Republicans, and the move, she said, led to an ensuing debate about how immigration was shifting the demographics in the middle of the country. 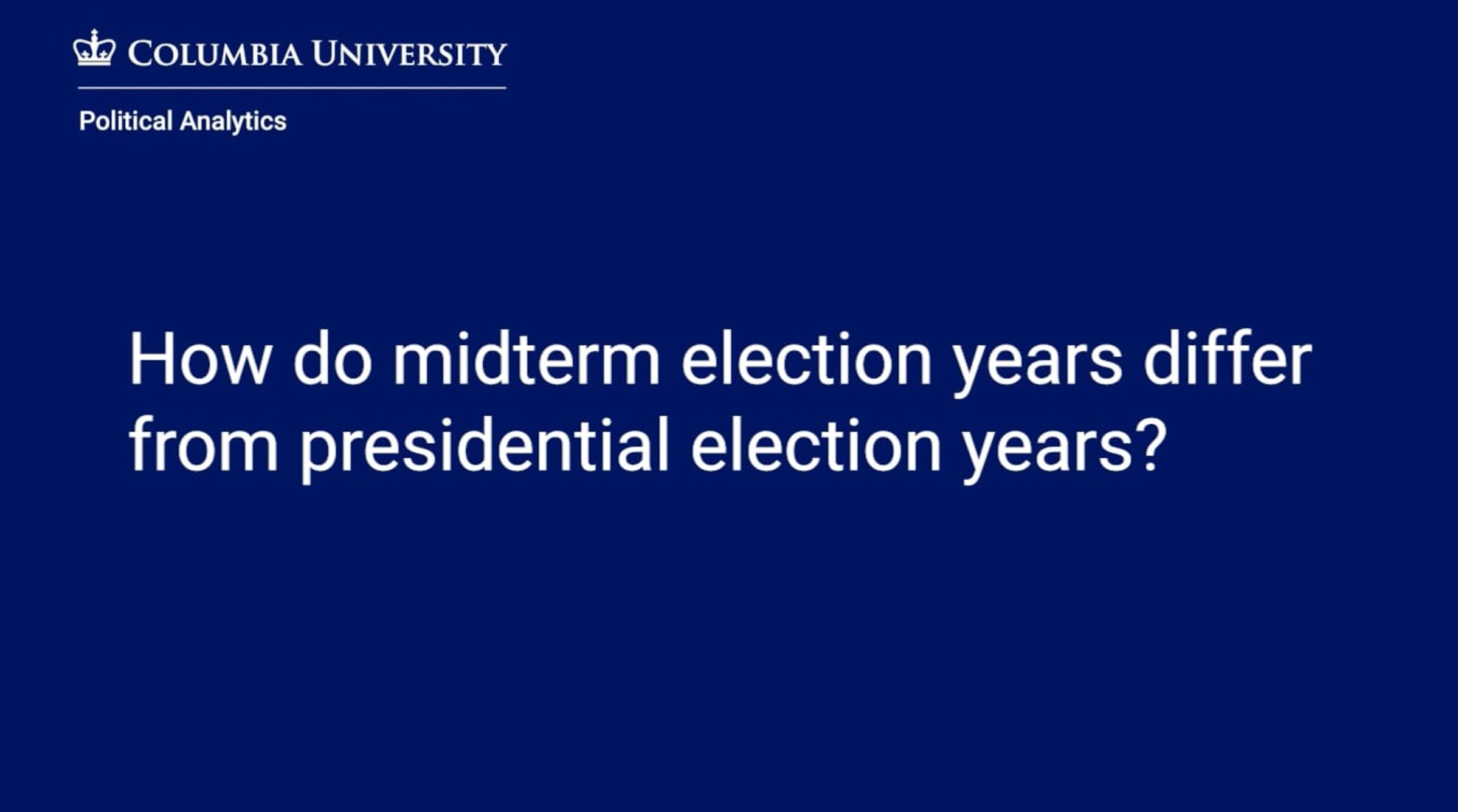 “[In the midterms,] you want to pay attention to what cuts across politics,” said Murray. “One such issue is now crime…and education…The questions for this cycle include, will Trump voters turn out for non-Trump candidates? How sticky are issues like abortion or January 6?”

Can we trust the data?

Dr. Doug Usher has spent the last two decades building insights that have helped change the strategic trajectory of major corporations, industry associations, and political campaigns. He lectures widely on the changing nature of measuring public opinion and sentiment. “First-term midterm elections are always tough on presidents,” he said. “Voters always think the country is going in the wrong direction.” He ranked the tightest senate races of the 2022 midterms–Pennsylvania, Georgia, and Nevada–saying that polling has already done its job, by predicting which races will be the most competitive. But it is difficult to trust most data in political polling. 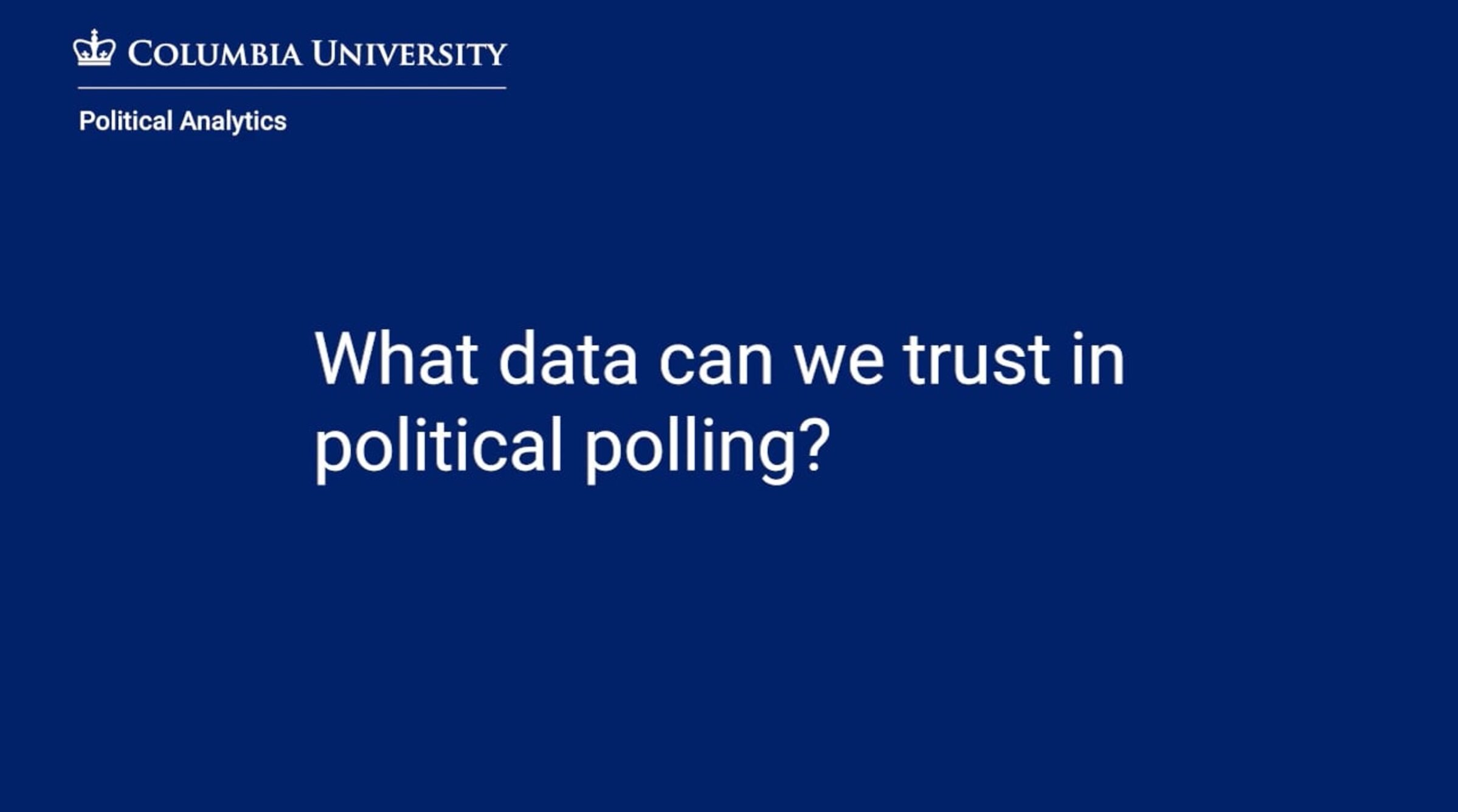 “I think the political prediction industry is rotten, as it’s built on clicks,” said Dr. Usher. “If it’s data-driven, it’s based on flawed data. Worst of all is when it’s not data-driven.”

Professor Robert Y. Shapiro specializes in American politics, with research and teaching interests in public opinion, policymaking, political leadership, the mass media, and applications of statistical methods. He discussed complications that have arisen in polling. “The problem with polling is not the polls, it is election polling, and in particular, election polling in particular states,” he said. “You’re trying to generalize an electorate that doesn't exist until Election Day, whereas general polls are polls of the public at large, for which you know the characteristics of that population from census data, and you can weigh the biases of that population accordingly.”

Professor Shapiro mentioned biases that pollsters have found in state polls, such as biases that underweighted white working class voters in the 2016 election–problems that continued into the 2020 election. “They thought they had adjusted for that, but, well, they hadn’t–the people they adjusted for turned out to be different from the white working class people who didn’t respond to the polls.” 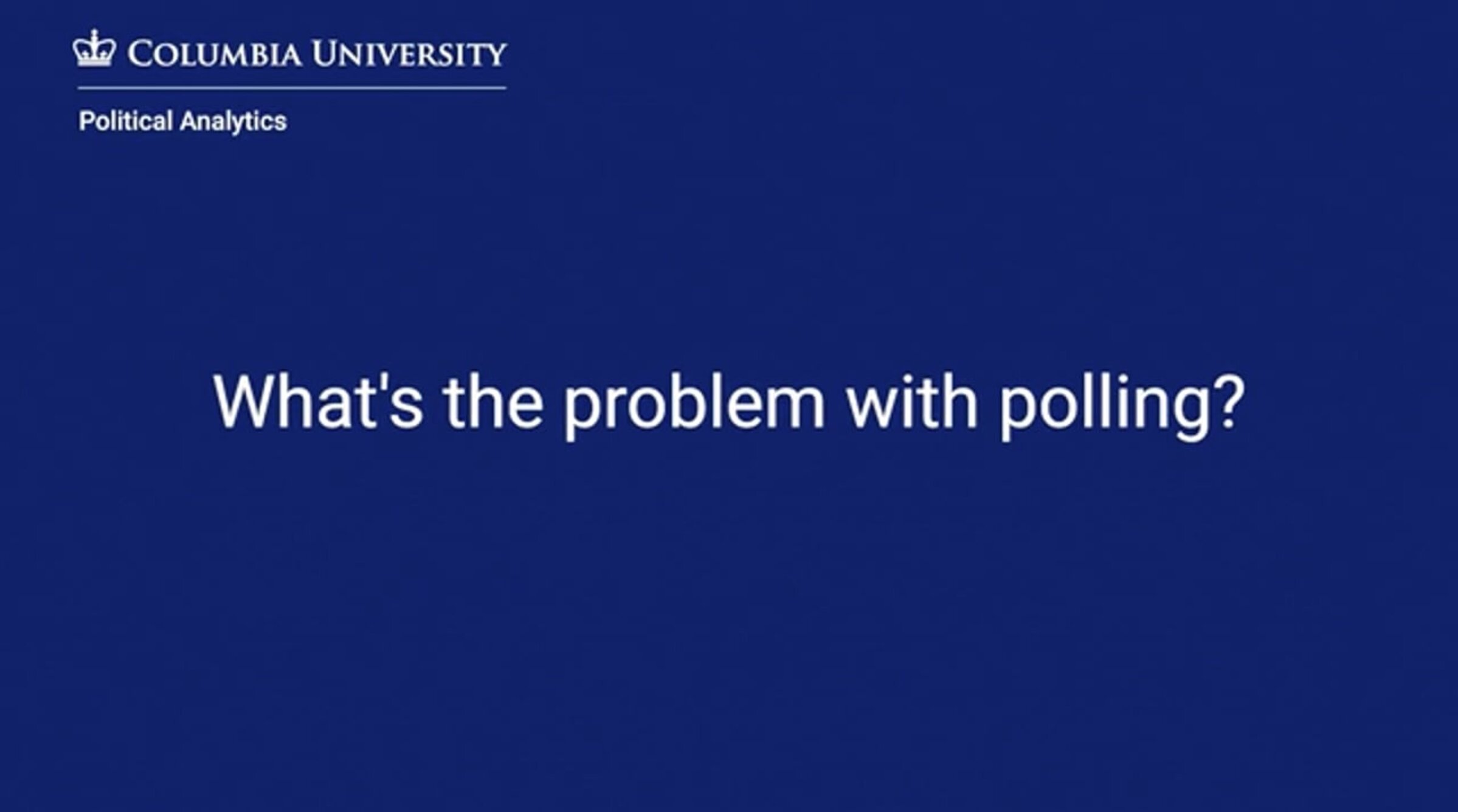 What are the biggest challenges political analysts face?

Dr. Aaron Strauss, who works with rigorous in-survey and real-world experiments in his role at OpenLabs, gave an overview of strategies used to measure political trends and opinions. One direct way to measure is A/B testing. One example of an A/B test is when someone runs two ads on a platform such as Instagram, and reports back which message gets the most clicks–a method that can work very well for political fundraising, but is mostly used in business. “In politics, you have to get a little more creative–you have to be a little more patient,” said Dr. Strauss.

He cited two popular methods for evidence-based data collection in politics: persuasion, which is the surveying of a group of people to ask whether a message changed their minds, and randomized trials, which could be a measurement of population data to see if an intervention, such as a mailer, made an impact on voter turnout. The challenge for budding political analysts, he said, is that “you have to wait for the next election to implement your findings, versus in business, where you can implement the change right away and see results. The upside is you can apply these insights and change the world for the better, which is not always true on the business side.” 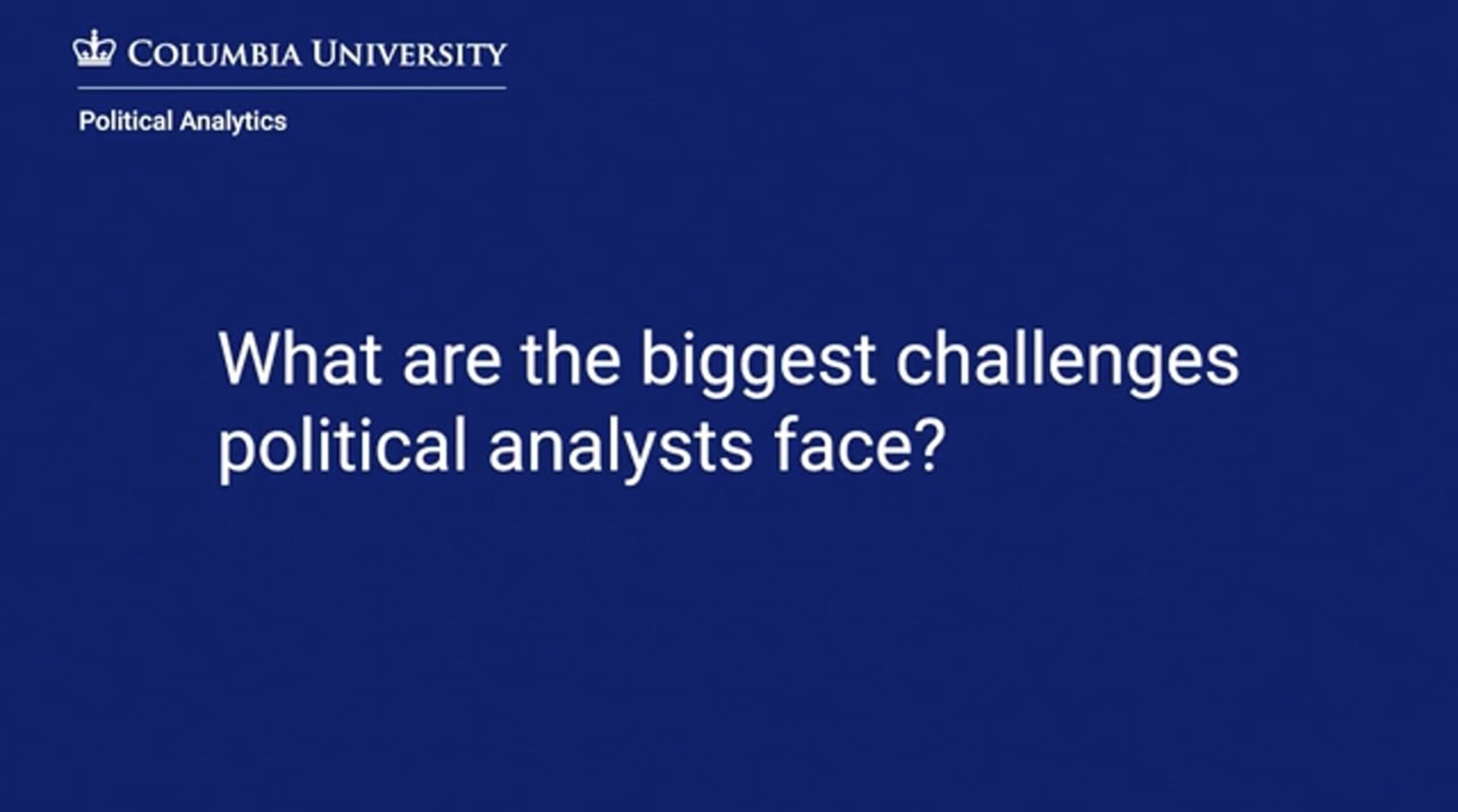 Professor Donald P. Green is a pioneer in field experiments, particularly with elections and turnout. He discussed differences between high-touch and low-touch voter interactions, which analysts need to balance to run an effective campaign. “High-touch interactions [like having a personal, one-on-one conversation] work very well, but they are very hard to scale…You need a balance of quality and quantity, which becomes an art form.” A class like Machine Learning, he said, teaches an analyst how to run many A/B tests, or randomized trial after randomized trial, to arrive at what messaging works best on which groups of people.

“This is the layout of the broad research agenda for people like me,” said Professor Green. “We envision a sea of randomized experiments where we’re going to figure out which combinations of code, messenger, message, and receiver tend to produce the biggest harvest of votes, and then optimize that as best we can over subsequent elections, knowing of course that the internal politics of the campaign are not necessarily going to follow the advice.” 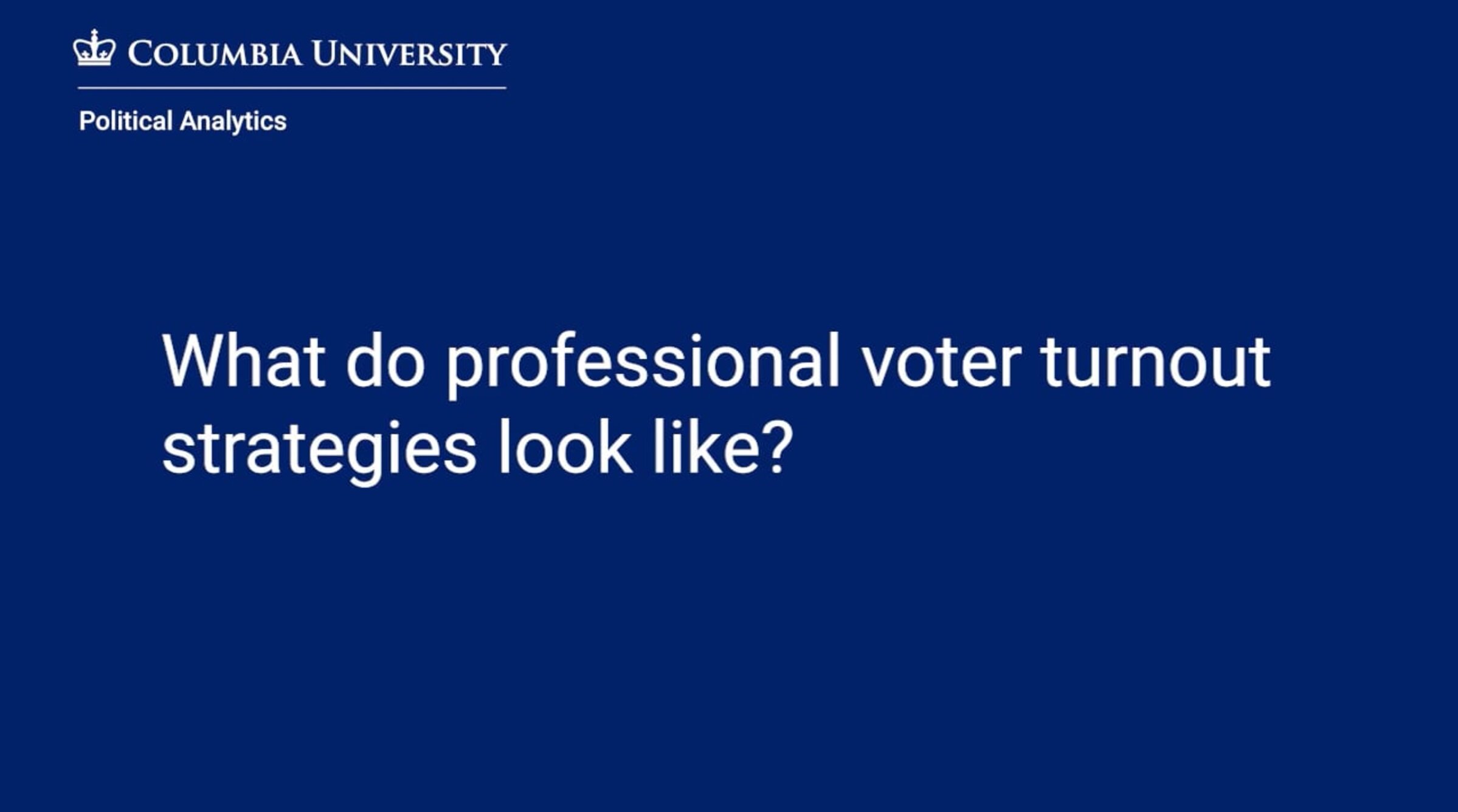 Dr. Usher ended with a note on the myriad career paths available to skilled political analysts. "Politics now is a much broader industry than candidate elections," he said. "I would speak specifically to initiative campaigns as well as to ongoing and consistent legislative and regulatory campaigns."

“The kinds of skills you’re going to learn in the program apply to all kinds of analytic problems related to the attitudes and behavior of individuals more broadly,” said Professor Shapiro. “In addition to all the analytics skills, I hope the program will teach students how to communicate, write about, and speak about the findings [that we’re discussing].”

The new M.S. in Political Analytics is the result of a collaboration between the Columbia University Department of Political Science and the School of Professional Studies. The program, which welcomes its first class in the fall of 2023, will train a new generation of political professionals to navigate this complicated data landscape responsibly and ethically.

Learn more about the Columbia University M.S. in Political Analytics.