After forty-four years of dedicated service to the Columbia Scholastic Press Association (CSPA) and in his fiftieth year of service to the University, Executive Director Edmund J. Sullivan will retire on July 22, 2022.

As both director and executive director, Sullivan’s tireless leadership has allowed CSPA to help tens of thousands of student journalists from across the country and around the world. He has fought to recognize the hard work and continuous innovation of both student journalists and their faculty advisers over the past four decades by establishing the Crown Awards (1982) and the Gold Circle Awards (1984). Increased education and enrichment have also been important, prompting Sullivan to create the annual Summer Journalism Workshop (1982).

“It has been my privilege to dedicate a lifetime to helping student editors and faculty advisers working with them to hone their craft, and to express themselves both responsibly and as freely as possible,” said Sullivan.

CSPA plans to honor Sullivan for his service and dedication as part of a future event. Details will be announced as plans are finalized with University officials.

It has been my privilege to dedicate a lifetime to helping student editors and faculty advisers working with them to hone their craft, and to express themselves both responsibly and as freely as possible."

A former high school newspaper editor, Sullivan recalls being forced to watch as his school’s principal burned an issue he had edited. He considers that episode as having “seared” the First Amendment into his consciousness. As a result, he has dedicated his working life to the cause of a free student press.

While Sullivan was named associate director of the CSPA in 1978, director in 1981, and executive director in 2006, his connection to the association began much earlier.

Leaving his Massachusetts hometown, Sullivan arrived in New York City in 1969 to attend Columbia University’s undergraduate school, Columbia College, from which he earned a degree in political science in 1973. He earned an M.A. in Higher Education Administration in 1981 and an Ed.M. in Student Development in 1985, both from Teachers College.

As an undergraduate, he worked for the CSPA as a full-time student employee, under the supervision of its second director, Charles R. O’Malley. It was during this time that he used his experience as a high school editor to help the association aid and support its network of high school and collegiate student publications.

“The 1970s were a difficult decade in the nation’s schools and colleges. Lots of student protests, censorship squabbles, and administrative backlash all combined to shake up the student press, who had been largely confined to covering pep rallies and school sports in prior years,” said Sullivan. “The Vietnam War, Watergate, and spiraling inflation unnerved almost everyone and the media, including student media, was front and center for all of it."

Sullivan was also an active member of the University’s student radio station, WKCR-FM, during his undergraduate experience. During his tenure as part of the news team, he covered the Columbia campus protests of 1970 and 1972. He provided real-time coverage of the protesters’ attempts to encourage the University to oppose American participation in the Vietnam conflict, as well as to criticize the University administration’s development of the Morningside Heights neighborhood. 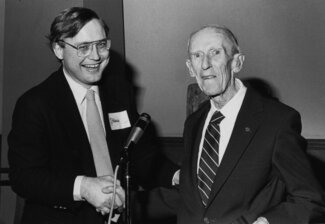 Ed Sullivan serves as the third executive director of CSPA. He introduces the first director, Col. Joseph M. Murphy at the Gold Key Dinner at the 60th Spring Convention in 1984.

Following his graduation, Sullivan worked for the University as the assistant director of its original student center, Ferris Booth Hall. In this role, he provided support to student and community groups looking to use the venue to host events, conferences, and presentations while brokering cooperation between various University academic and administrative departments. He also worked as business adviser to fifteen student organizations headquartered there.

In 1978, he reestablished his connection to the CSPA when he was named associate director, helping director Charles R. O’Malley to navigate uncertain times–both within the University and among the growing membership of the association.

During his CSPA tenure, Sullivan witnessed many challenges to First Amendment rights and the enforcement of “prior review," where a high school or college administration is permitted to restrict the content of student publications. In 1988, he sat in the United Stated Supreme Court chamber to hear the entire oral arguments of Hazelwood School District v. Kuhlmeier, which upheld a local Missouri principal’s decision to remove content from a student newspaper, The Spectrum, from Hazelwood East High School.

Sullivan served on the Student Press Law Center Board of Directors from 1983 to 2000, helping to promote, support, and defend the First Amendment and press freedom rights of high school and college journalists and their advisers.

In 1996, the Columbia Scholastic Press Advisers Association (CSPAA, the advisory group of the CSPA) established the Edmund J. Sullivan Award in his honor, recognizing student editors who pursue innovative ways of presenting the truth on behalf of their audiences. To date, there have been 12 recipients of the award, including The Spectator newspaper staff from Stuyvesant High School (New York, NY), for producing a special edition of their publication focusing on the effects of the attacks of September 11, 2001–which took place only a few blocks from their campus. 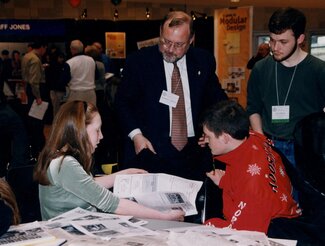 During the 2002 Spring Convention, Sullivan meets with students and gives a mini critique on their newspaper in between sessions.

From 1991 to 1997, Sullivan and CSPA were responsible for the content, design, printing and distribution of FACETS (Facts About Columbia Essential To Students), an annual University handbook, which was an essential, pre-Internet resource for students, faculty and staff. FACETS served as an official index to all the University’s schools and programs, a directory to all of its locations, and comprehensive guide to Columbia’s various policies and procedures. More than 40,000 copies were printed and distributed University-wide each year.

In 1997, the University moved CSPA to the supervision of the University’s Graduate School of Journalism (now the Columbia Journalism School). In 2006 Sullivan was appointed as executive director of professional prizes for the Journalism School, supervising the administration of the Alfred I. DuPont-Columbia University Awards, the John B. Oakes Award, the John Chancellor Award, the Maria Moors Cabot Prizes, and the Paul Tobenkin Memorial Award. While continuing his work with the CSPA, he served in this added duty until 2011. 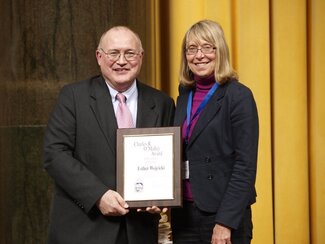 In March 2011 Sullivan presents Esther Wojcicki the Charles R. O’Malley Award for Excellence in Teaching. Wojcicki taught at Palo Alto High School where the media program began at twenty students and grew to over 500 students with four teachers. She helped develop the model of Google Certified Teachers and served as chair of the board of directors for Creative Commons.

After two decades within the Provost’s office, the CSPA was moved to the School of Professional Studies in 2018 where it currently resides.

Sullivan served as a Presidential Delegate for the University from 1985 to 2015, helping to ensure the proper administration of the University’s rules and regulations in times of crisis and emergency. He has also served as the Head Marshal for Academic Procession during Columbia's annual Commencement exercises (1982-2022), overseeing the organization and seating of faculty, staff, administration, and honorees during the University’s most public annual event.

He is the author of the "Student Journalism" entry in the Encyclopedia of American Journalism, edited by Stephen L. Vaughn, published in 2008.

Besides his work at Columbia, he is currently a member of the governing board of his local parish, the Church of Notre Dame in the Morningside Heights neighborhood of Manhattan.

ABOUT CSPA - Founded in 1925, the Columbia Scholastic Press Association unites student editors and faculty advisers who produce student newspapers, magazines, yearbooks and online media. Students come from public, private and church-related schools and colleges throughout the United States and from overseas schools following an American plan of education. The Association is owned and operated by Columbia