At SPS this fall, all courses, other than pre-established online courses, will be offered face-to-face in our New York City classrooms. Some of these face-to-face courses will be offered in the HyFlex format to ensure that all of our students can make progress toward their degree requirements, if faced with delays due to student visas or vaccination effectiveness wait times.
Close alert
Tuesday
2019
when
6:30 pm–8:30 pm EST
what
Community Relations
where
New York City
Back to all SPS events 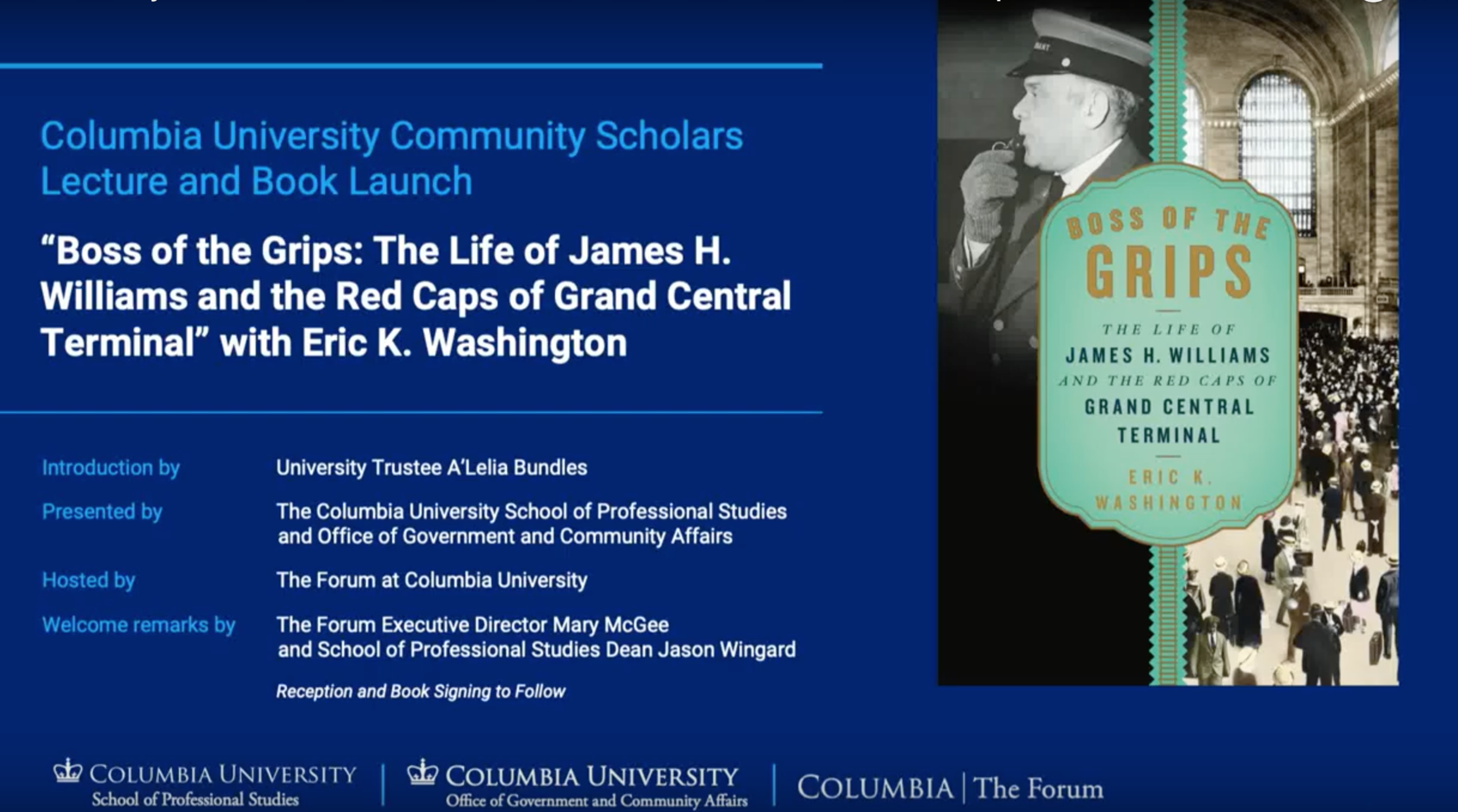 Boss of the Grips: The Life of James H. Williams and the Red Caps of Grand Central Terminal with Eric K. Washington

In this Community Scholars Lecture, Eric K. Washington discusses the Harlem Renaissance-era labor figure James H. Williams, subject of his just-published biography. In a timely reclamation, he uncovers the nearly forgotten life of James H. Williams (1878–1948), the chief of Grand Central Terminal’s iconic Red Cap porters. That multitude of Harlem-based black men not only once formed the essential labor force of America’s most august railroad station, but often infused the lifeblood of the Harlem Renaissance in the 1920s. Washington reveals that despite the highly racialized and often exploitative nature of the work, the Red Cap was a highly coveted job for college-bound black men determined to join New York’s bourgeoning middle class. Examining the deeply intertwined subjects of class, labor, and African American history, Washington chronicles Williams’s life, showing how he successfully navigated the segregated world of the northern metropolis, and in so doing ultimately achieved financial and social influence. With this biography, Williams must now be considered, along with Cornelius Vanderbilt and Jacqueline Onassis, one of the great heroes of Grand Central’s storied past.

Eric K. Washington is an independent historian who has held fellowships at Columbia University and the CUNY Leon Levy Center for Biography, as well as the MFAH Dora Maar House in Ménerbes, France. He lives in New York.

“In this illuminating debut biography, historian Washington celebrates a black New Yorker who won authority and influence in a segregated economy.... He paints a vivid portrait of the bustling golden age of train travel, and makes Williams a fitting exemplar of Harlem’s ambitious black middle class... The result is a rich, stirring social history of African-Americans’ struggle to succeed in an unfair system.” — Publishers Weekly

The Columbia Community Scholars Program, administered by the Office of Government and Community Affairs and the School of Professional Studies, enables independent scholars to pursue their lifelong learning aspirations through access to Columbia University courses and resources.